Denver and the 'Colorado Rockies'

A visit to the US Mint was actually on my bucket list having been unable to have a look around it last time I was in Denver. Sadly I was to be disappointed as it turned out we needed to pre-book the free tours about 3 months ahead! Fortunately tours around the US Mint's other location in Philadelphia don't need to be pre-booked so this item on my bucket list can wait until I get there later during my trip. 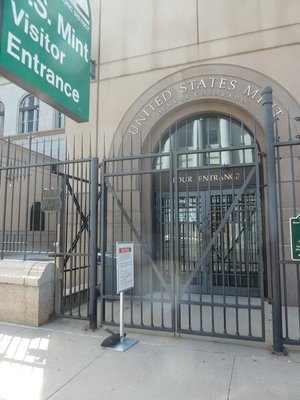 The visitor's entrance to the US Mint in Denver

We then walked across the Civic Center Park in downtown Denver, past a copy of the Liberty Bell (the original is in Philadelphia) to the Colorado State Capitol. The building looks like a copy of the Capitol in Washington although sadly the gold plated dome itself is currently obscured by white sheeting while essential repairs are carried out. Denver has been dubbed the "Mile High City" and sure enough a step leading up to the main entrance is engraved as being precisely "One Mile above Sea Level" and I had the obligatory photograph taken of me standing on it. 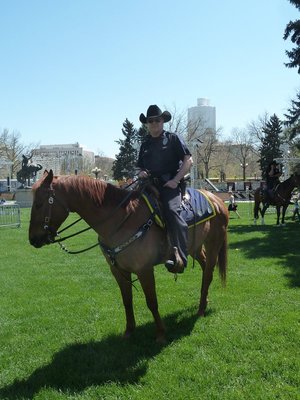 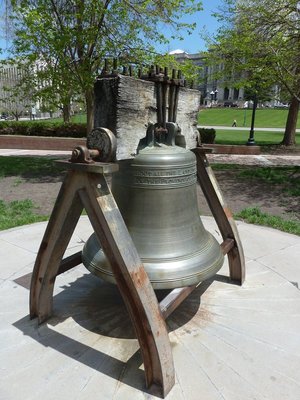 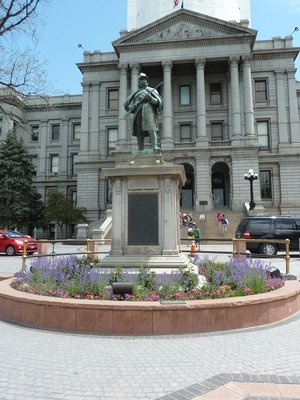 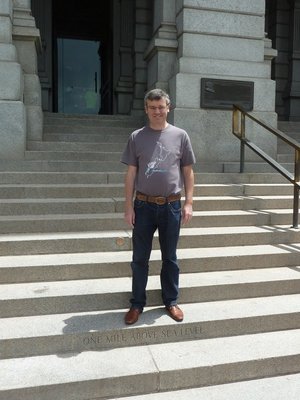 A short distance from the Capitol is the History Colorado Center, an innovative new museum that first opened in April 2012. Their headline temporary attraction while I was there (and about the only exhibit we weren't allowed to photograph) was the Jefferson Bible borrowed from the Smithsonian Institute in Washington. This bible is in effect a personal scrapbook of selected verses from the gospels of Matthew, Mark, Luke, and John pasted together in chronological order by Thomas Jefferson (principle author of the USA 1776 Declaration of Independence) to create a single narrative and then duplicated side by side in four languages (English, French, Latin and Greek).

The star of the museum for me however was the Anschutz Hamilton Hall with a map of Colorado for its floor on which we were able to push around a pair of seven foot high "steam punk" time machines to various hot spots on the map. The clocks on the time machines would then wind back and the video screens would tell quirky stories from the history of the location. 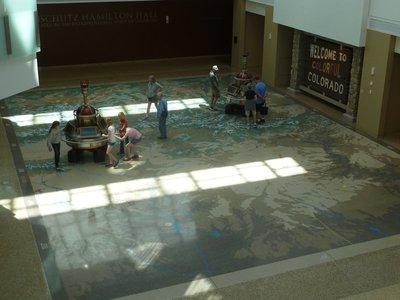 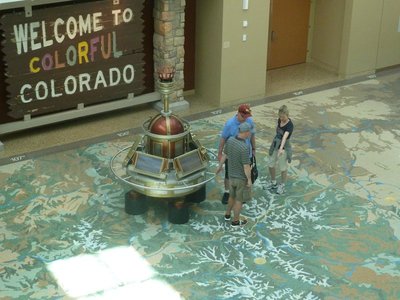 On the same floor as the time machines was Destination Colorado, a hands on recreation of life on the Colorado prairies in the 1920s. Here you could milk a virtual cow (the bucket lights up as you squeeze the teat!), drive a Model T Ford or visit a General Store - really something aimed more at school children than ourselves so surprisingly we didn't stay there long. A lot more interesting though was Colorado Stories on the top floor. 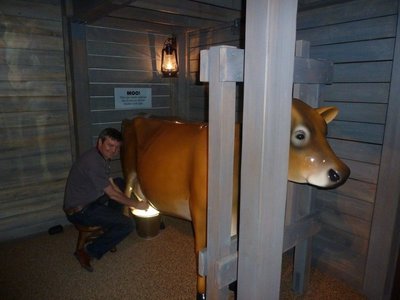 Colorado Stories contained galleries highlighting aspects of the history of about 8 localities around the state. I found the gallery on Bent's Fort, a prairie trading post from the mid nineteenth century, particularly interesting as included amongst the sample of goods from around the world it traded with local Indians was Stroud Scarlet from back home in Gloucestershire in the UK (Stroud Scarlet was the red cloth used historically for British Army redcoats). 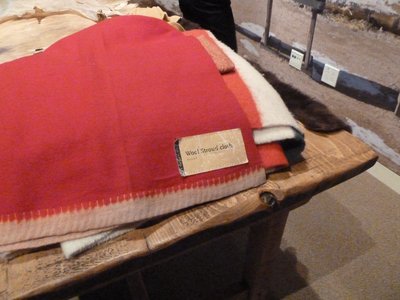 Bent's Fort in 'Colorado Stories' - and amongst the goods being traded is Stroud Scarlet Cloth from back home in Gloucestershire!

Amongst the other exhibits in Colorado Stories were galleries on silver mining in Silverton (which reminded me of my trip down the Lebanon Mine a few days earlier), life in the WWII Amache Relocation Center for people of Japanese ancestry and the 1864 Sand Creek Massacre of Indians by local militia (probably one of the more tragic stories from Colorado's history). 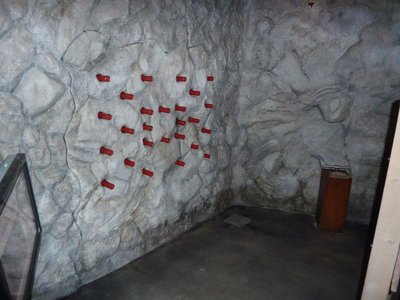 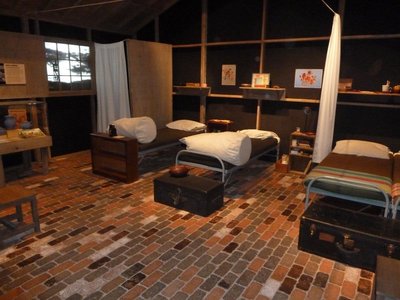 We then escaped the museum and went for afternoon tea at the Brown Palace Hotel which is considered the landmark hotel in Denver. Originally opened in 1892, my guidebook describes it as an "Italian Renaissance-style structure with elegant dining rooms and a common area based around a sunlit eight story atrium lobby with tiers of iron railings." Famous former guests at the hotel include the Beatles, various US presidents and the 'unsinkable' Molly Brown from the Titanic. Before making our way home we had afternoon tea with scones and finger sandwiches served on a 3 tier silver pedestal tray washed down with Earl Grey and Kir Royale - cousins that lunch! 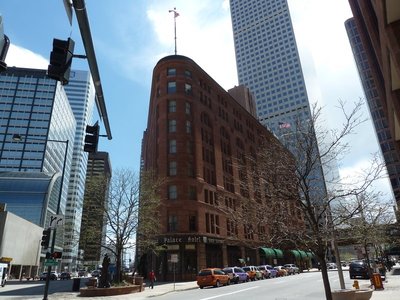 The Brown Palace Hotel in Denver 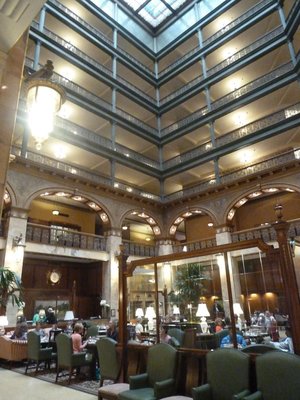 The eight story atrium lobby inside the Brown Palace Hotel 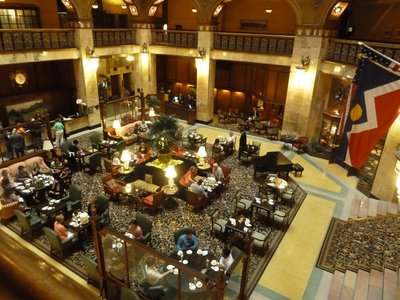 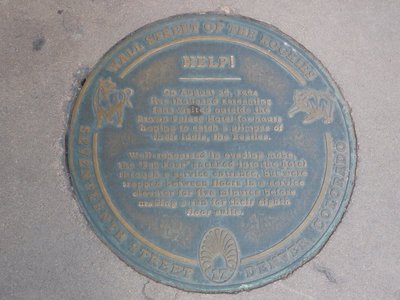 I do enjoy watching live baseball and have been kindly taken to games on my last two visits to the USA. Earlier in my trip I had seen the LA Dodgers beat the Milwaukee Brewers in double quick time while in Los Angeles but it was now time to see if I was going to be a good luck charm for the Colorado Rockies as well. So the following day we returned to downtown Denver to Coors Field, the home of the Colorado Rockies Baseball Team, with me dressed in a purple Rockies "Dexter Fowler 24" shirt (Dexter is a Rockies centerfielder) to watch them play the San Francisco Giants. 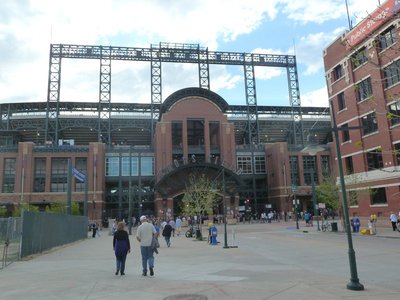 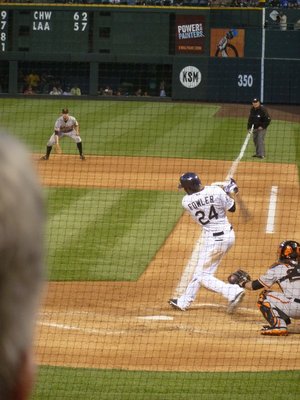 Dexter Fowler at the plate for the Colorado Rockies

The game started well with the Rockies taking a 5 run lead including a grand slam home run (i.e. a home run with all 3 bases loaded) but then the Giants came back with the Rockies eventually winning 10-9 in a nail biting finish (am I beginning to sound like I know what I'm talking about?). After the game we went looking for an Irish Bar in Lower Downtown (universally known as LoDo by the locals) to celebrate and found Scruffy Murphys, coincidentally exactly the same name (although no connection) as the Irish Bar I found in Sydney, Australia. 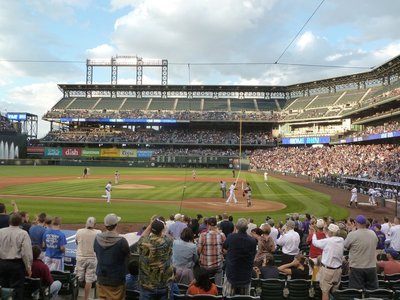 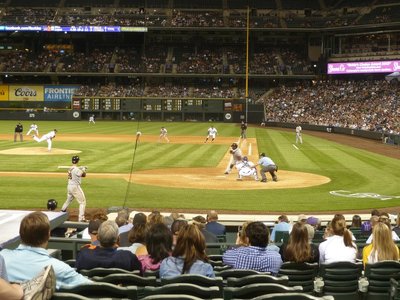 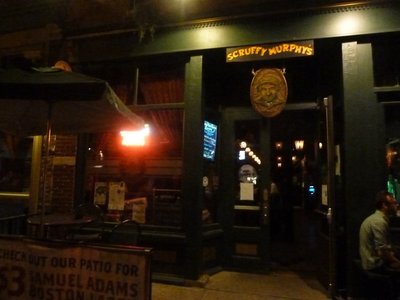 Scruffy Murphys Irish Bar in Denver where we went to celebrate (didn't I visit its namesake in Sydney?)

Three days later I had another opportunity to see the Colorado Rockies play at home, this time against the Arizona Diamondbacks. By now it had dawned on me that US baseball fixtures are described the other way round to sports fixtures back home i.e. away team @ home team rather than home team v away team; trust the Americans to be different! 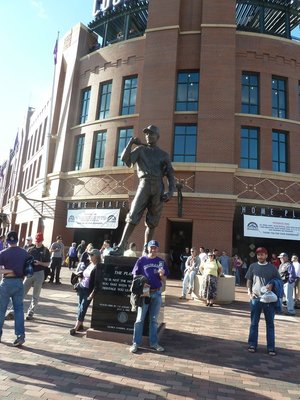 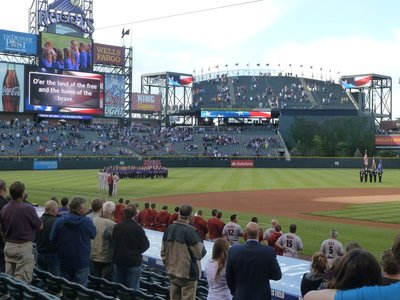 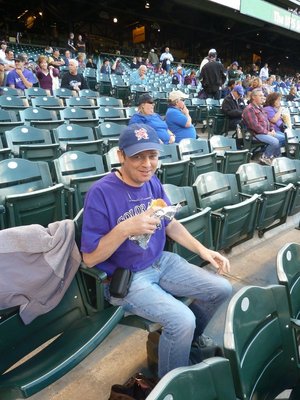 Me enjoying a 'Rockie Dog' while watching the baseball

Although the Arizona Diamondbacks attracted a smaller crowd than the San Francisco Giants a few days previously it was no less exciting and I witnessed my first Major League Baseball game go into extra innings with the two teams tied at 4-4 after the usual 9 innings. We had to leave but listened to the game on the radio on the way back as the Rockies went on to win 5-4 in the 'bottom' (i.e. while the 2nd team is batting) of the 10th. 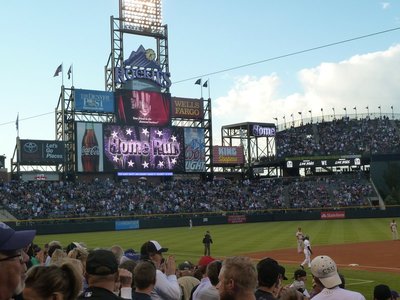 Another Home Run for the Rockies - perhaps I am a lucky charm at the baseball after all? 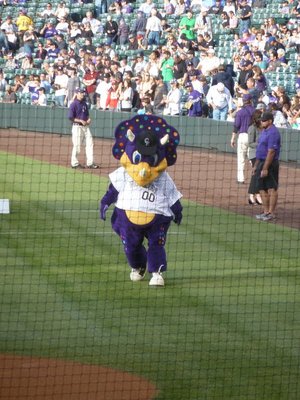