Watching baseball and eating cheesesteaks with the Phillie Phanatics

Having spent the morning sightseeing, we boarded the Philadelphia Subway to get back to our car and drive on to the Citizen Park Baseball Stadium, home of the Philadelphia Phillies, to watch their game against the Milwaukee Brewers.

The fare system on the Philadelphia Subway was the most old fashioned I had seen on my travels; we needed coin tokens (costing $2 each and purchased from kiosks) to get through the platform turnstiles at the start of each journey. At the Delaware River the subway climbed out of its tunnel and crossed the river on tracks running along the side of the Ben Franklin Bridge from where we got a terrific view of the WWII USS New Jersey Battleship moored along the Camden Waterfront on the opposite side of the river. 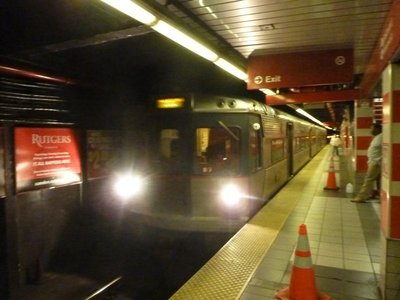 A train on the Philadelphia Subway 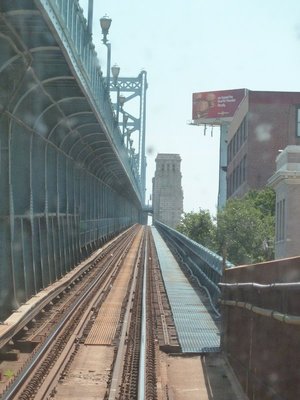 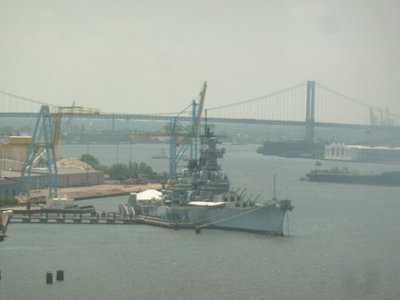 After we parked the streets were remarkably quiet as no traffic is allowed on the roads immediately north of the stadium. As we walked we passed rows of parked vehicles with people sat on folding chairs sharing beers and barbeques at pre-game tailgate parties; although something of an American institution tailgating wasn't something I had encountered previously at the baseball games I had seen in Los Angeles and Denver. 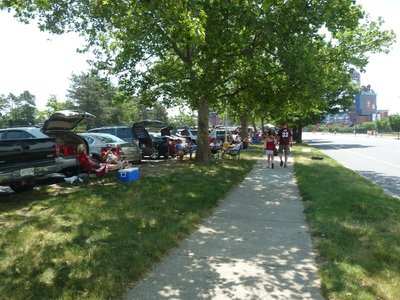 Tailgate parties on the way to the Baseball Stadium 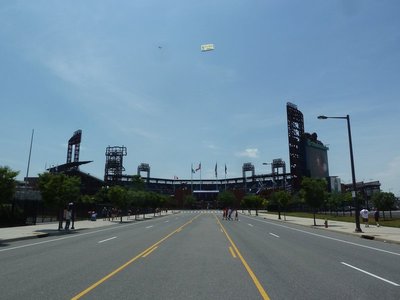 As with all major baseball grounds Citizen Park Baseball Stadium had several statutes of Philadelphia Phillies baseball stars from the past. The first we saw was of pitcher Steve Carlton just outside the Left Field Gate entrance. However the one that matters most to the local fans is of Richie Ashburn on Ashburn Alley, a raised walkway behind the center field. Richie Ashburn played for the Phillies 1948-1959 and then was broadcaster for them until his death in 1997.

For me however Ashburn Alley will always be remembered as the place where I finally tried the much hyped local delicacy known as a Philadelphia Cheesesteak, a sandwich made from thinly-sliced pieces of steak and melted cheese in a long roll. I enjoyed my cheesesteak, it reminded me of good kebab from a takeaway back home. 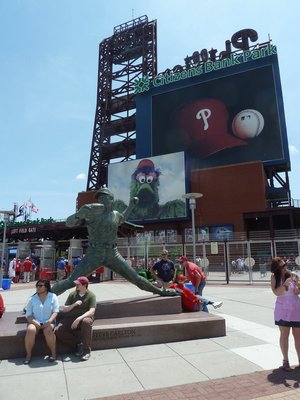 Steve Carlton's statue outside the Left Field Gate Entrance... with Phillie Phanatic making his first appearance on the screen behind him! 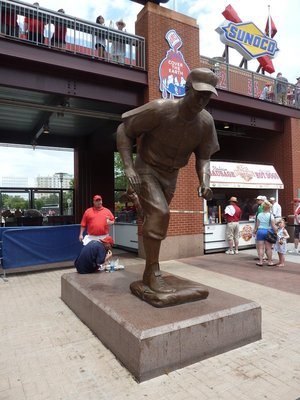 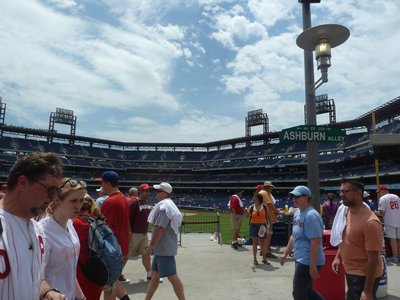 Looking across the baseball field from Ashburn Alley 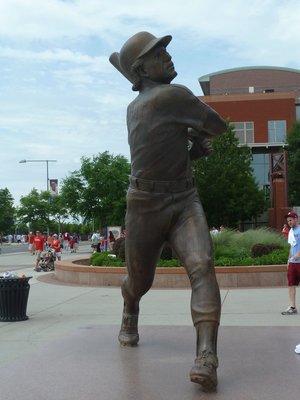 Mike Schmidt's statue outside the Third Base Gate Entrance

The Philadelphia Phillies have a large, furry, green mascot called Phillie Phanatic who seems to get everywhere; we'd already seen on the large screen above the entrance on the way in. His job seems to be race around the stadium on an all-terrain vehicle taunting the opposition as much as possible and playing pranks on them! Phillie Phanatic certainly seems to be the most active of the baseball mascots I have seen. 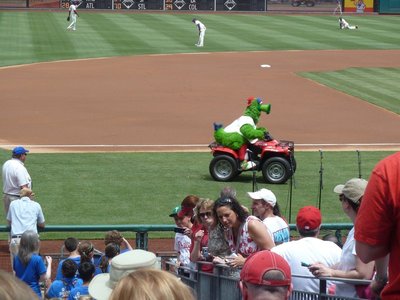 Phillie Phanatic, the club mascot, racing around the field while the players warm up 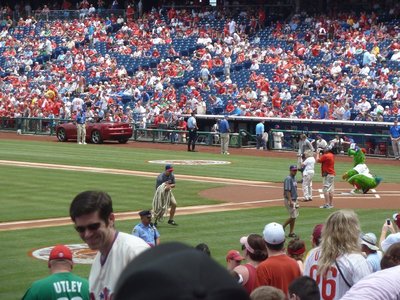 Phillie Phanatic has a go at being catcher

The game got underway and the Philadelphia Phillies soon took a 5 run lead in their 1st innings including a 3 run homer which prompted the 'ringing' (i.e. illuminating and swinging) of the 52 feet (16 metre) high replica of the Liberty Bell that stands 102 feet (31 metres) above street level beyond the right outfield. 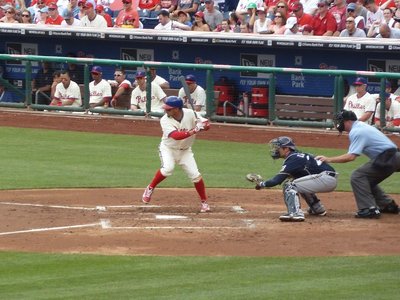 A batter for the Phillies prepares to hit the ball 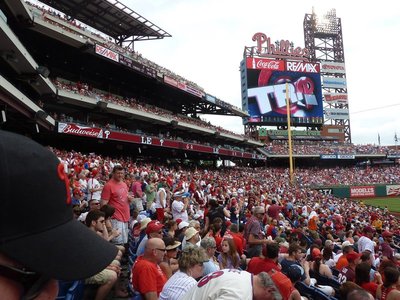 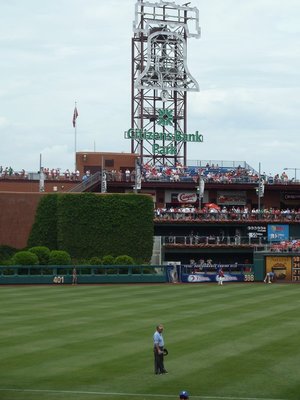 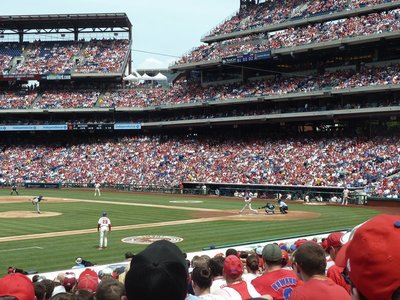 Action shot as the Brewers pitch at the Phillies

By the end of the 2nd innings Philadelphia were 7-0 ahead which remained the score until the 8th and 9th innings when Milwaukee managed to score 5 runs. It wasn't enough and Philadelphia eventually won 7-5, maintaining my 100% record of watching my cousins' baseball teams win; perhaps I am a lucky charm? 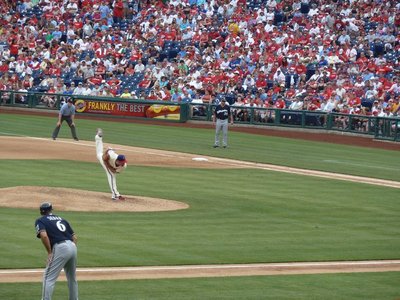 Cliff Lee pitching for the Phillies 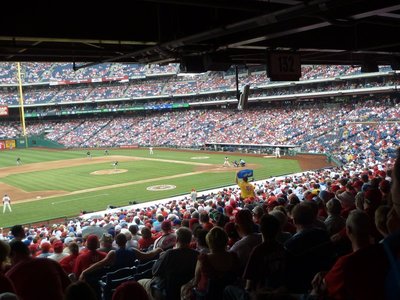 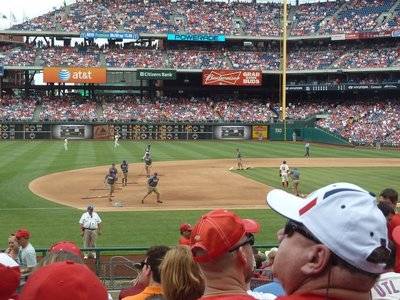 Raking the infield after the 6th innings 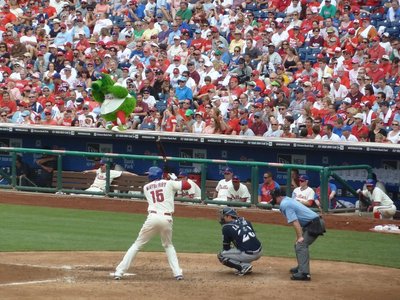