San Clemente and a weekend away in Mexico

San Clemente describes itself as a "Spanish Village by the Sea" and is located on California's Pacific Coast about half way between Los Angeles and San Diego. It was founded by a former Mayor of Seattle, Ole Hanson, who envisaged it becoming a haven for Californians who tired of "the big city". Its most obvious landmark is its beautiful 1,296 foot (395 metre) long wooden pier original built in 1928. 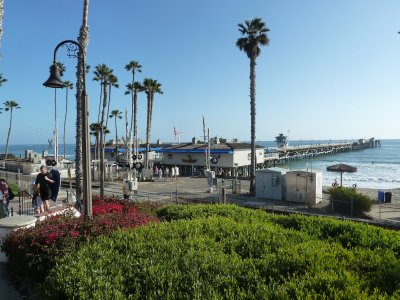 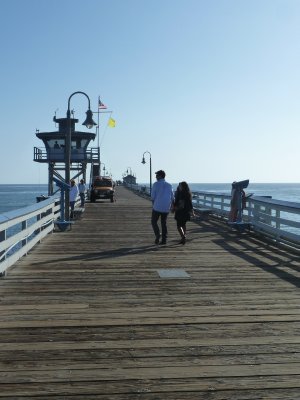 Looking out along San Clemente Pier 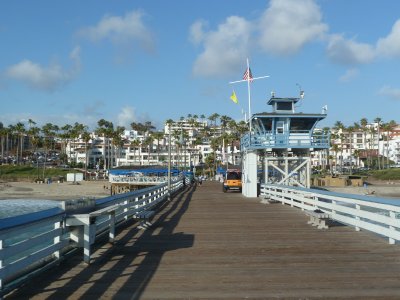 Looking back along San Clemente Pier

Sat on a bluff-top above the pier is Casa Romantica, with a red tiled roof and white stucco arches it was the original home of San Clemente's founder Ole Hanson built in 1928 in the Spanish style and is now heritage listed. However what San Clemente is more famous for is La Casa Pacifica which was bought by President Richard Nixon in 1969 as his vacation home during his presidency and became known as the "Western White House". 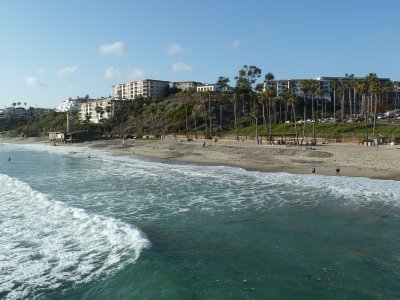 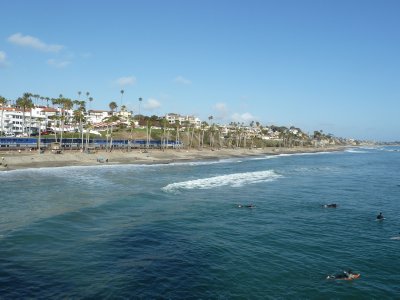 Mexico was not a country I thought I would be able to include in my itinerary of my trip around the world so I was very pleased when the chance of a weekend south of the border arose while I was in San Clemente. We drove down to Rosarito Beach (Playas de Rosarito in Spanish), a Pacific coastal resort 30 miles south of San Diego in the Mexican state of Baja California that is very popular for its beaches and dance clubs. Our hotel, around which the surrounding town grew, was originally opened in 1925 but since then has had a lot built onto it including the 17 storey Presido Tower in which we stayed. 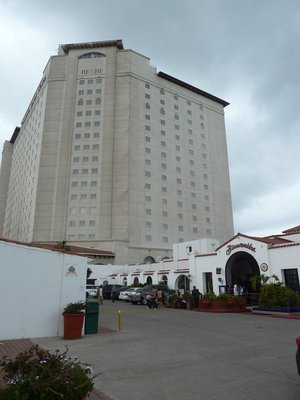 The Pacifico Tower at the Rosarito Beach Hotel 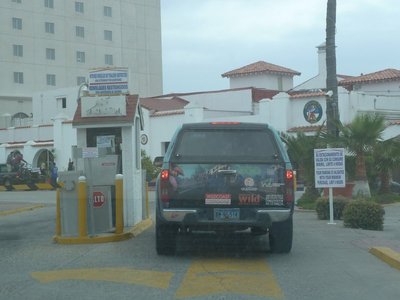 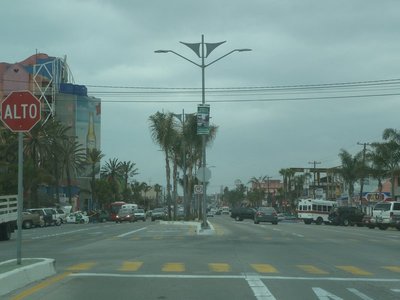 The street outside the Rosarito Beach Hotel 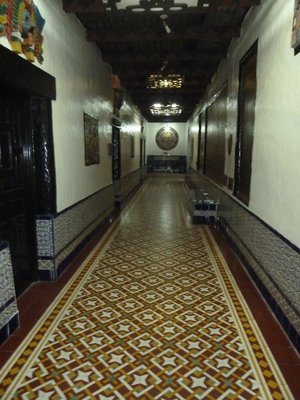 Corridor in the old part of the Rosarito Beach Hotel

In addition to bars, restaurants and a ballroom the hotel we were staying at also had a lovely golden sand beach and a quarter mile long private pier. Unfortunately the weather was not at its best while we were there so the pier was closed and there were few takers for the horse or quad bike riding however it was evident from the volleyball nets, stands of empty seating and other paraphernalia that this could often become a very busy beach. 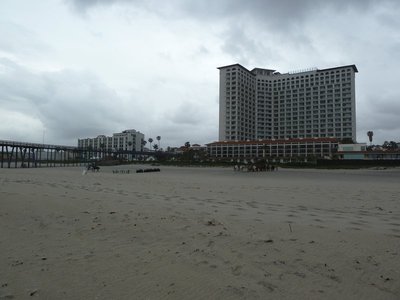 View from the beach of the Rosarito Beach Hotel 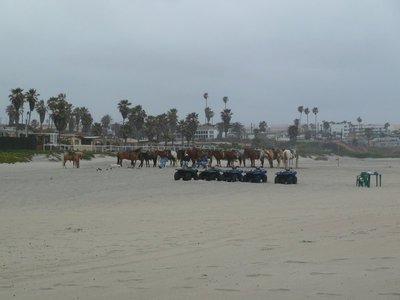 Horses and quad bikes waiting for tourists on Rosarito Beach 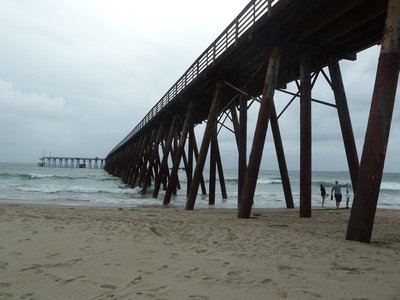 The pier at the Rosarito Beach Hotel 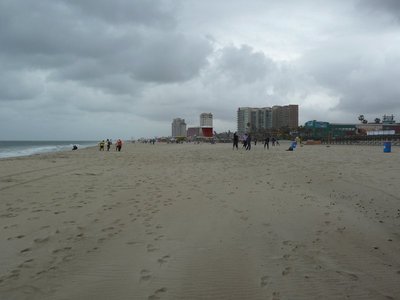 The beach at the Rosarito Beach Hotel

We did venture south to Puerto Nuevo passing the enormous 75 foot (23 metre) high statue of Christ of the Sacred Heart (Cristo del Sagrado Corazon in Spanish) above the highway at the town of El Morro. Puerto Nuevo itself is known as "the Lobster Capital of Baja" and having been coaxed into a restaurant and chosen the crustaceans we wanted to eat we enjoyed lovely fresh lobster for Sunday lunch. 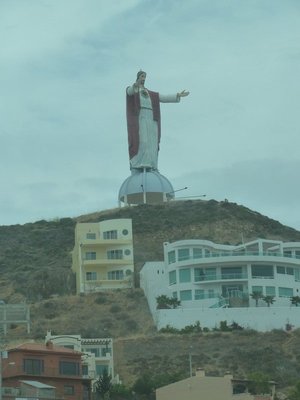 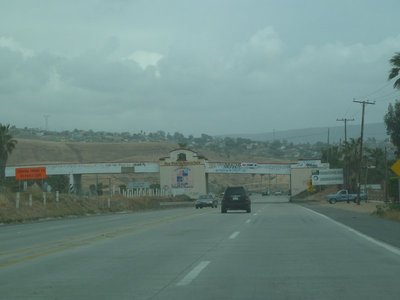 Entering the town of Puerto Nuevo in Baja California Mexico 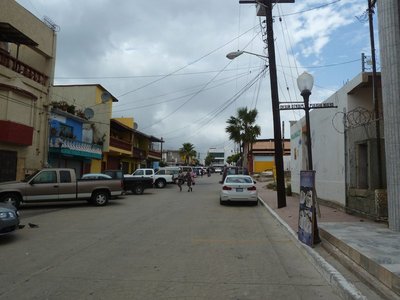 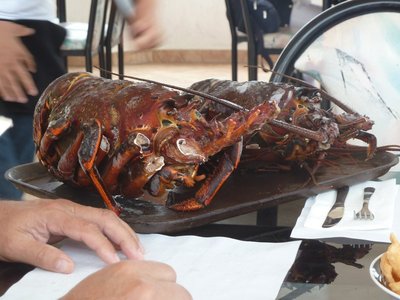 Lobster ready for the pot in Puerto Nuevo

On the Monday morning it was time for us to return north across the USA border, experiencing the heavy traffic in Tijuana just south of San Diego on the way. Thankfully our hotel was part of the Border Fastpass Scheme and this enabled us to use a dedicated lane to avoid the chaos and often 2 hour delay crossing over the Mexico/USA border. 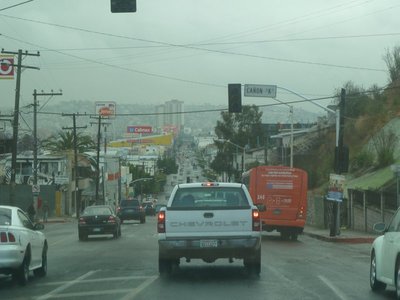 Entering Tijuna on the way back to the USA border 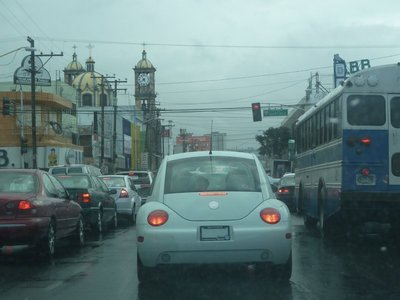 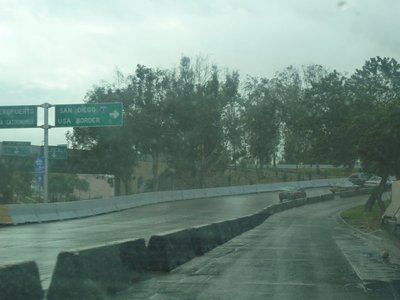 Following the signs in Tijuna to the USA border 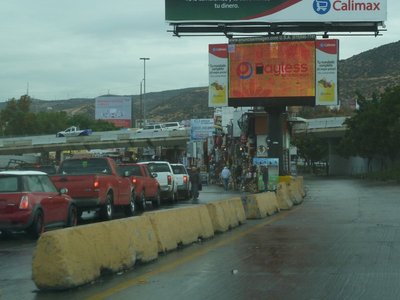 Chaos approaching the USA border, thankfully we had a Border Fastpass from our hotel :-)

On our return to San Clemente we visited family in Valley Center just north of San Diego and managed to stop at Mission San Luis Rey de Francia founded in 1798 at Oceanside on the way back. The 21 Spanish missions in California are a series of religious and military outposts established by Spanish Catholics of the Franciscan Order between 1769 and 1833 to spread the Christian faith among the local Native Americans. Starting from San Diego they stretch north with each mission about 30 miles apart - considered a long days ride on horseback or 3 days walk. All told I saw 5 of the 21 missions while I was in California, including the Mission at San Juan Capistrano which I had visited on a previous visit to California and we passed as I got on the Amtrak train to Fullerton. 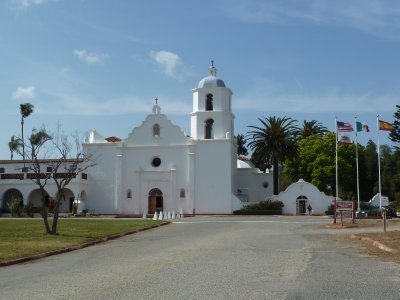 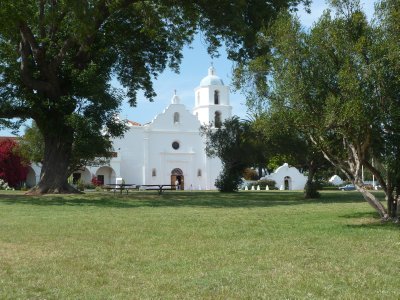 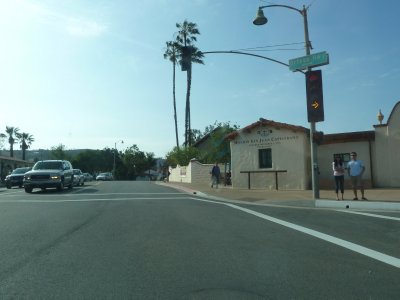 The Mission at San Juan Capistrano 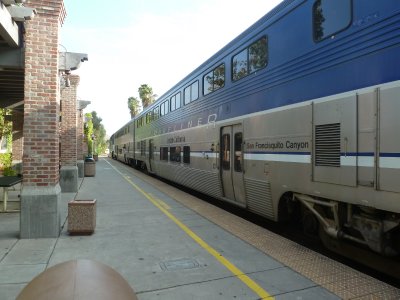