Arriving in Los Angeles my first bit of sightseeing was a gentle stroll along the Venice Canals. Venice was founded by tobacco millionaire Abbott Kinney in 1905 with two miles of ocean front just south of Santa Monica and was meant to be based on its namesake in Italy. The pedestrian-only promenade along its beach is famous for its performers, fortune-tellers, artists, and vendors; less visited is the highly desireable canal side residential district behind it. 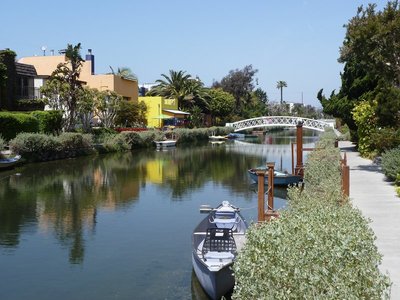 The Venice Canals in Los Angeles

From the Venice Canals I moved on to Disneyland. A lot has changed since my previous visit to Disneyland more than 10 years ago so a return trip was high up on my bucket list for Southern California this time round. The first really big change is that Disney have opened up a whole new adventure park called Disney California Adventure directly opposite Disneyland itself. Like Disneyland it is divided up into themed districts and we began our day there with a stroll down the main street in Hollywood Land to our first ride - The Twilight Zone Hollywood Tower Hotel. This is a 183 feet (55.8 metre) high accelerated drop in darkness, I'm sure the straps are looser than comfortable to make it a bit more scary! 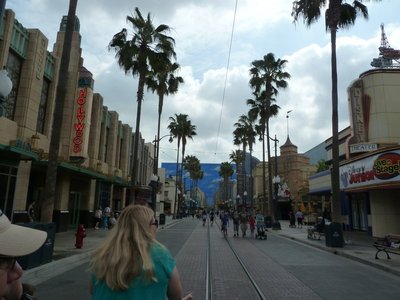 Strolling down the Hollywood Land Street in Disney California Adventure 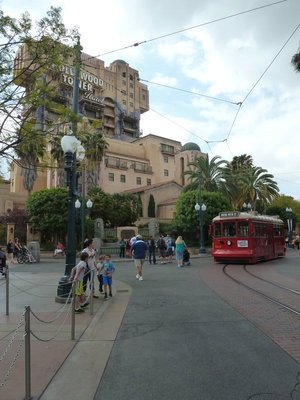 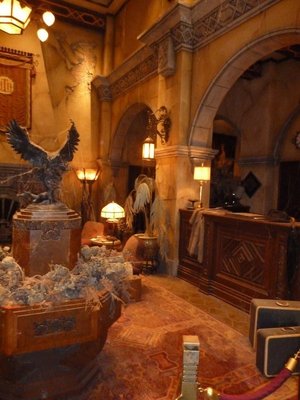 Reception Desk inside the Hollywood Tower Hotel - Welcome to the Twilight Zone! 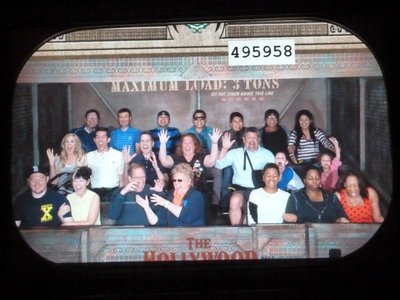 Next up was Radiator Springs Race Track in Cars Land next door which was probably my favourite ride in Disney California Adventure. Opened in June 2012 and inspired by the Pixar Cars Films, it consisted of a slot car ride through various scenes from the films before a thrilling race around the track against another car - our car we won! 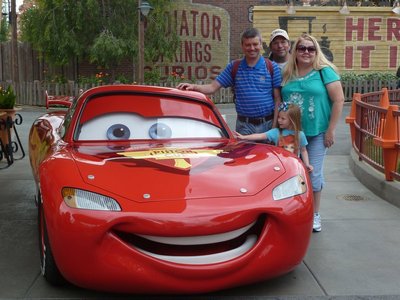 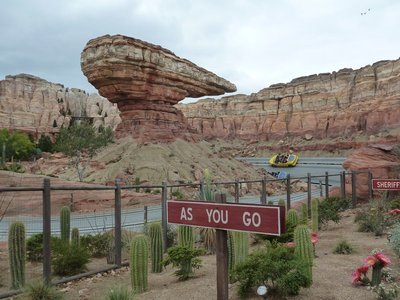 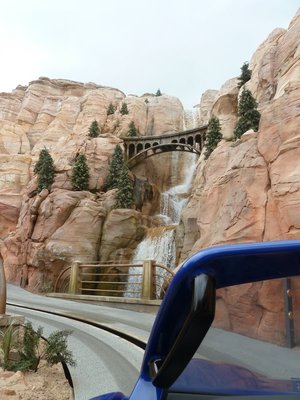 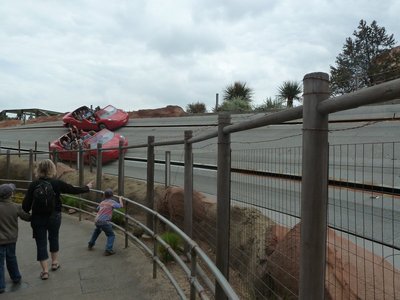 After a brief stop in Pacific Wharf to pose for a picture of me caught in a fish net we moved on to the seaside fairground inspired rides around the lake in Paradise Pier. First up was a ride on Mickey's Fun Wheel, a large Ferris wheel with a choice between 'swinging' and 'non swinging' gondolas! Next we went for a ride on the California Screamin' high speed roller coaster - yes I must admit I screamed! 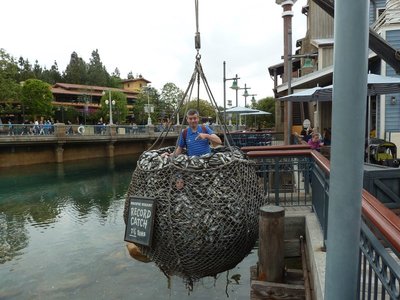 Me caught in a net of fish in Pacific Wharf 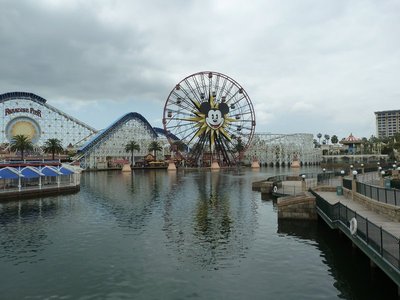 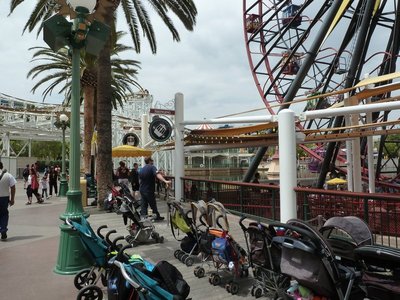 Do you want a 'Swinging' or 'Non-Swinging' Gondola on the Ferris Wheel? 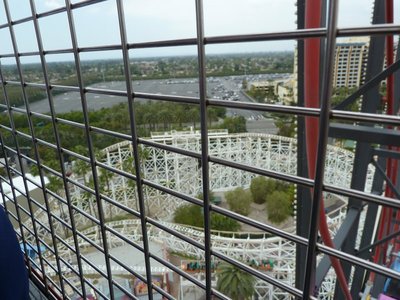 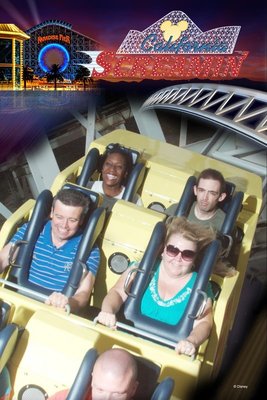 We then moved on to Grizzly Peak where we took a ride and got soaked whitewater rafting on the Grizzly River Run. Our final stop before moving over to Disneyland proper was Soarin' over California where your chair is raised up in the air and forward in a concave theatre to simulate a hang gliding trip over several of California's landmarks. 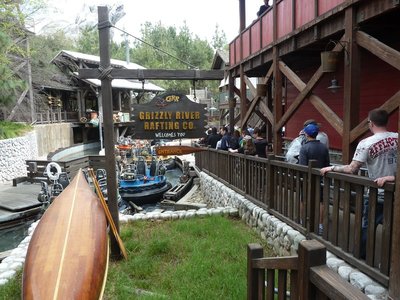 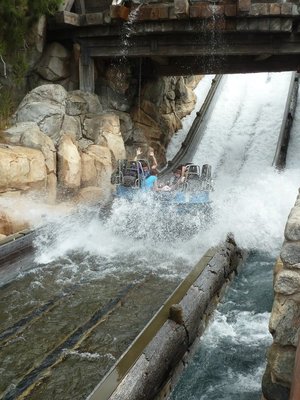 A raft gets soaked on the Grizzly River Whitewater Rafting Run 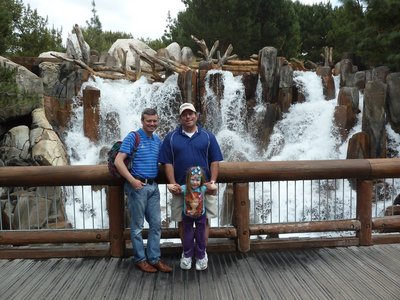 Posng in front of the waterfall in Grizzly Peak

We then left Disney California Adventure and moved across the entry plaza and entered Disneyland proper where we began by having our picture taken beside several Disney characters. There was Mickey Mouse, Goofy and Pluto of course but also ended up posing beside a couple of Disney Princesses - Ariel (from the "Mermaid" film) and Snow White as well, which I am not sure was very good for my street cred back home! We then walked up Main Street USA and saw Walt Disney and Mickey Mouse's Statue before passing through Sleeping Beauty's Castle. 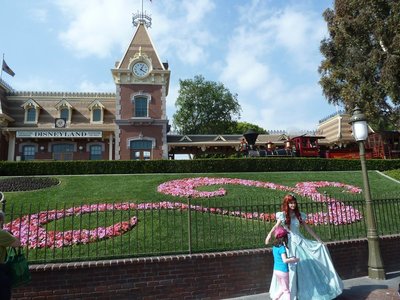 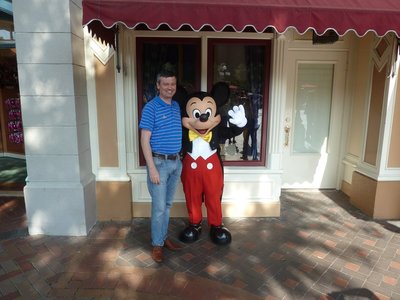 Me having my picture taken with Mickey Mouse 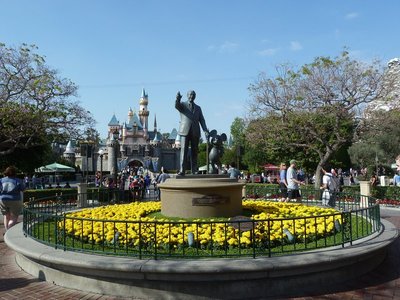 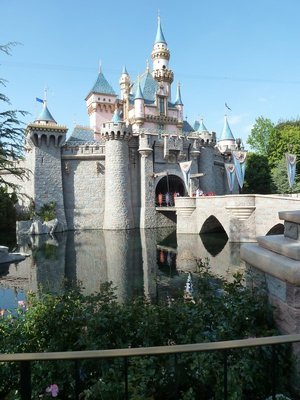 Having petted the goats in the petting zoo in Critter Country we got on the Indiana Jones Temple of the Forbidden Eye ride in Adventureland. Apparently the Mercedes-Benz truck on the way in was used in the Raiders of the Lost Ark film and on the ride itself we were on a similar truck as it raced around the temple bucking every way it can while things were thrown at or collapsed around us. Next door was the Jungle River Cruise which must be one of the oldest and corniest rides in the park as you sail past various vignettes of jungle action in a small river steamer. 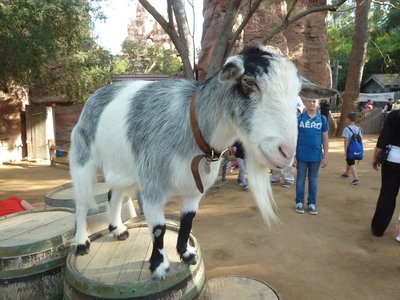 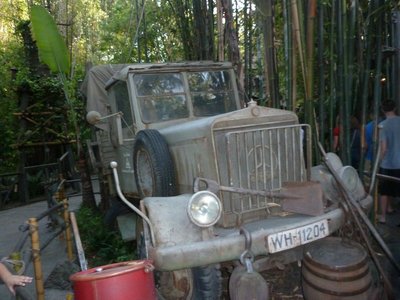 Truck on the way into the Indiana Jones Adventure in Adventureland 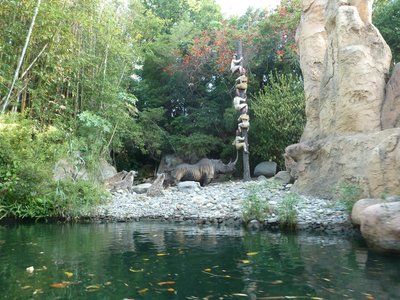 View ashore from the Jungle Cruise in Adventureland - how old is this ride?

We then moved into New Orleans Square and went into the Haunted House and took a ride on the Pirates of the Caribbean. By now it was getting dark and we had time for just one more adrenaline rush by climbing aboard the Splash Mountain log plume before the park closed. 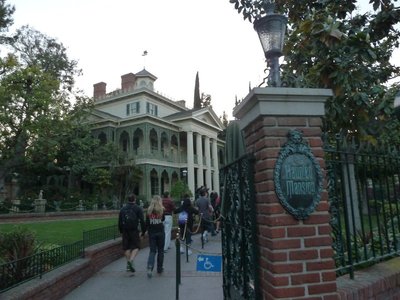 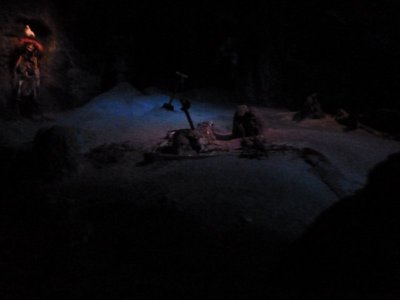 Inside the Pirates of the Caribbean Ride in New Orleans Square 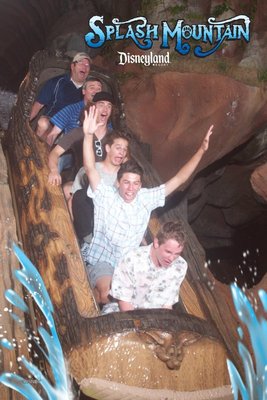